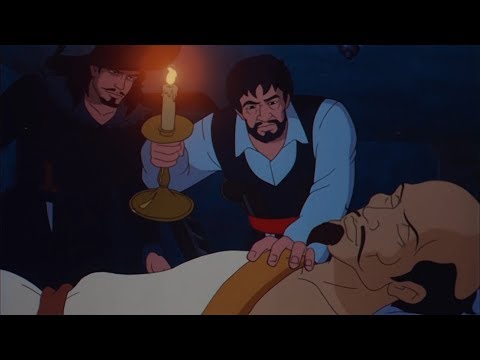 ЧОРНИЙ ПІРАТ, МУЛЬТИКИ ДЛЯ ДІТЕЙ. Carmaux and Van Stiller, are buccaneers that managed to escape death by hanging to which they had been sentenced by the Governor of Maracaibo, Van Gould. The two survivors, were part of the crew on the ship of the Red Corsair, the brother of the commander of the Thunderbolt. The Red Corsair is now dangling from the gallows together with his faithful friends, in the main square of the city and is supposed to remain there for at least three days, exposed to the view and the scorn of the whole town. This is what Carmaux and Van Stiller relate to the commander of theThunderbolt, the Black Corsair. The man does not even shed one tear listening to the report of the death of his last brother by the hand of Van Gould, but in the look on his face there is a terrible thirst for vengeance. The Black Corsair decides to get into Maracaibo stealthly, led by the two escaped death by hanging, and to take away his brother's body to give him a proper burial at sea.