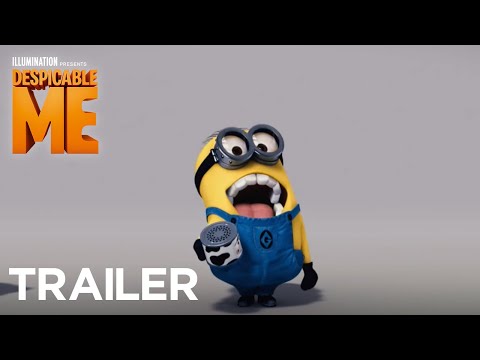 Despicable Me - Teaser Trailer #3: In Despicable Me, Gru (voiced by Steve Carell) is planning the biggest heist in the history of the world. He is going to steal the moon (Yes, the moon!) But no villain not even the worlds (second) greatest villain can do everything by himself. So it should come as no surprise that Gru has an entire army of not-so-bright Minions to help him carry out his diabolical plans....unless they get distracted by a Moo Cow toy! The Minions are creatures of unknown origin - small, yellow and seemingly indestructible. Hardworking and devoted to their leader and his mad exploits, they are content to serve as Gru's crash test dummies along the way. Despicable Me, from Illumination Entertainment and directed by Chris Melendandri, hits theaters July 9, 2010.

Music by Pharrell and Hans Zimmer.

Behind an army of Minions, Gru is faced with a steep challenge to take back his crown as the world's number one super villain. Make sure to check out the movie Despicable Me to see what mischief unfolds!